San Bernardino County is included in the Riverside-San Bernardino-Ontario, CA Metropolitan Statistical Area, also known as the Inland Empire, as well as the Los Angeles-Long Beach, CA Combined Statistical Area. With an area of 20,105 square miles, San Bernardino County is the largest county in the United States by area, although some of Alaska’s boroughs and census areas are larger. It is larger than each of the nine smallest states, larger than the four smallest states combined, and larger than 71 different sovereign nations.

Located in southeast California, the thinly populated deserts and mountains of this vast county stretch from where the bulk of the county population resides in two Census County Divisions, some 1,422,745 people as of the 2010 Census, covering the 450 square miles south of the San Bernardino Mountains in San Bernardino Valley, to the Nevada border and the Colorado River. 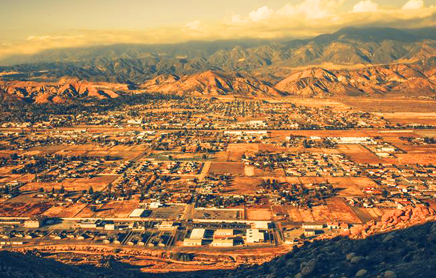