Nye County is located in the southwest portion of the U.S. state of Nevada. As of the 2010 census, the population was 43,946. Its county seat is Tonopah. At 18,159 square miles, Nye is the largest county by area in the state and the third-largest county in the contiguous United States.

Nye County comprises the Pahrump, NV Micropolitan Statistical Area, which is included in the Las Vegas-Henderson, NV-AZ Combined Statistical Area. In 2010, the center of population of Nevada was located in southern Nye County, very near Yucca Mountain.

The Nevada Test Site and proposed Yucca Mountain nuclear waste repository are located in the southwestern part of the county, and are the focus of a great deal of political and public controversy in the state. The federal government also manages 92 percent of the land in the county. A 1987 attempt to deposit the nuclear waste resulted in the creation of Bullfrog County, Nevada, which was dissolved two years later.

Nye County is one of 11 Nevada counties where prostitution is legal. The county has no incorporated cities. The seat of government in Tonopah is 160 miles from Pahrump, where about 86 percent of the county’s population resides. Nye County is nicknamed “The Kingdom of Nye” from the radio program Coast to Coast AM, created by Pahrump resident Art Bell. 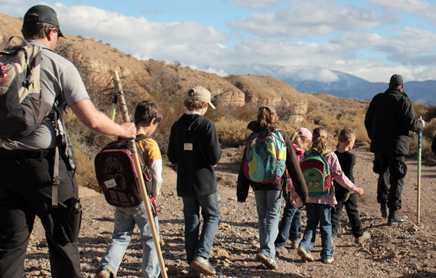